The Cholmondeley’s Coffeehouse’s (Chum’s) staff of 13 students is unsure of their continuing roles at the coffeehouse after the unexpected Chum’s “reorganization” announced this week. The employees were told not to return to work after an incident with the fire alarm on Friday, March 6. Since then, they have been told they will have the opportunity to reapply for their jobs in the future. Brandeis has not released a statement regarding the current status of the employees, but has stated that all positions are being redefined, and regular hours and service will not resume until a new staff is hired, but previously scheduled events at Chum’s will still be held.

Despite the suddenness and firmness of the notification, the Chum’s staff has not been “fired,” according to Brandeis spokesman Bill Schaller. Yet the employees disagree with this statement. “Flagel and the administration are claiming that we are not being fired and that they never told us we were going to be fired, which is obviously not the case because Chum’s is shut down, and we are not being paid, and we haven’t been working, and we are being asked to reapply,” stated Eli Philip ’15, a former Chum’s employee.

On the night of March 6, the fire alarm went off in Chum’s, a student-run space on campus. When the two employees on shift checked the back hallway, they found students smoking. Against protocol, the employees did not evacuate the building, and when Brandeis Public Safety arrived, they told the students to close for the night.

The following Monday, March 9, three Chum’s employees met with Stephanie Grimes, assistant dean of students and director of student activities, and Robert Steinberg, a student activities specialist and the liaison between the Chum’s employees and the administration. At the meeting, the employees were told that because of the fire alarm incident, they were thinking about firing the staff, Niri Halperin ’15, a Chum’s employee, explained. On Wednesday, March 11, the entire staff met with Grimes and Steinberg and were told that they would hear about whether or not they would keep their jobs by the end of the weekend.

Immediately after the meeting, the Chum’s employees convened to write a proposal about how to move forward from the incident. They wanted to prove to the administration that they were willing to, and wanted, change. “We sat down with the staff and really poured hours and our souls into this Google Doc,” said Liz Villano ’16. In the final document that was sent to the administration, the Chum’s employees proposed seven new managerial roles, fire protocol training for all employees and outlined ways to improve Chum’s employee relationships with Student Activities. 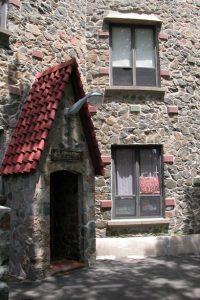 On Monday, March 16, all 13 Chum’s employees received an email that stated Brandeis was “restructuring” Chum’s. “They did not say we were being fired in the email, but they did say there was ‘restructuring’ happening, and that we were welcome to reapply” said Halperin. While the email did acknowledge and thank the employees for the effort they put into the proposal and their ideas, the employees were not invited to any further discussion regarding the restructuring of Chum’s.

“We are reviewing how Chum’s operates as there have been significant challenges associated with it, and we deem it necessary to review and reorganize the management and staffing structure,” wrote Bill Schaller, executive director of integrated media, in an email to The Brandeis Hoot. While the Brandeis administration is reorganizing Chum’s, the former employees are left without shifts and without pay.

“Being encouraged to reapply basically means that we’re fired. They just could not use the word because they are not legally able to do so because we are entitled to a verbal warning and a written warning,” said Josh Berman ’15. Berman, in addition to the other employees, believe that because Brandeis did not follow proper protocol when firing the employees, as described in the student handbook, Rights and Responsibilities, under “Involuntary Termination,” Brandeis neglects to acknowledge the fact that the employees were fired.

While the Chum’s employees are unable to distinguish their current employment standing from being fired, Schaller wrote, “All current members of Chum’s staff are being evaluated for positions in the reorganization, and many of the changes being implemented were suggested by the student leadership of Chum’s. Any student currently employed who is not matched with a position will be offered another on-campus student employment slot, so no one has been fired by any measure.”

As of now, the Chum’s employees are without hours, without pay and waiting to reapply for their jobs in the future. “We think that it’s totally unjust and possibly illegal to fire all of us, and we are looking to organize students to make their voices heard,” said Berman.