The University Advisory Council (UAC) did not hold a vote to change the name of “Columbus Day” to “Indigenous People’s Day” on Brandeis’ academic calendar at their Thursday meeting, despite a student-led campaign and a Change.org petition that has accumulated more than 500 signatures this week. They will instead leave the decision to a faculty vote on Oct. 7.

The Faculty Senate will now discuss the proposal and submit a recommendation at the next Faculty Meeting on Oct. 7, where those in attendance will vote on the change. If the faculty vote “yes,” the change will be made immediately, and if they vote “no,” the issue will return to the UAC for discussion, according to Julie Jette from the communications office.

Sophie Warren ’18, a leader of this movement at Brandeis understands the lack of precedent for changing holidays on the academic calendar and “[sees] a benefit” in allowing faculty to have a say. This means the community must show them the importance of the change before the meeting, she noted.

Indigenous People’s Day is a national movement to change the way people think about the founding of America and to institute a celebration of native cultures.

This movement began at Brandeis last year when Sophie Warren ’18 approached the Student Union and created a resolution with Lorenzo Finamore ’18, then Senator-at-Large. Passed on March 21, it recommends Brandeis implement Indigenous People’s Day because it will benefit the community to “[engage] in a celebration of Indigenous People’s culture and history.” It further states “the legacy of Christopher Columbus is one of imperialism, genocide, torture, enslavement and long-term systematic injustices which conflict with Brandeis University’s core principles of social justice.”

A public campaign began on Monday, Sept. 19. Organizers created the petition, the Facebook event and covered the campus with flyers. The Rabb Steps, which lead to most humanities classes, are covered in posters hanging from the railings and taped to the ground. There is also a banner at the bottom with sheets of paper for petition signatures attached. 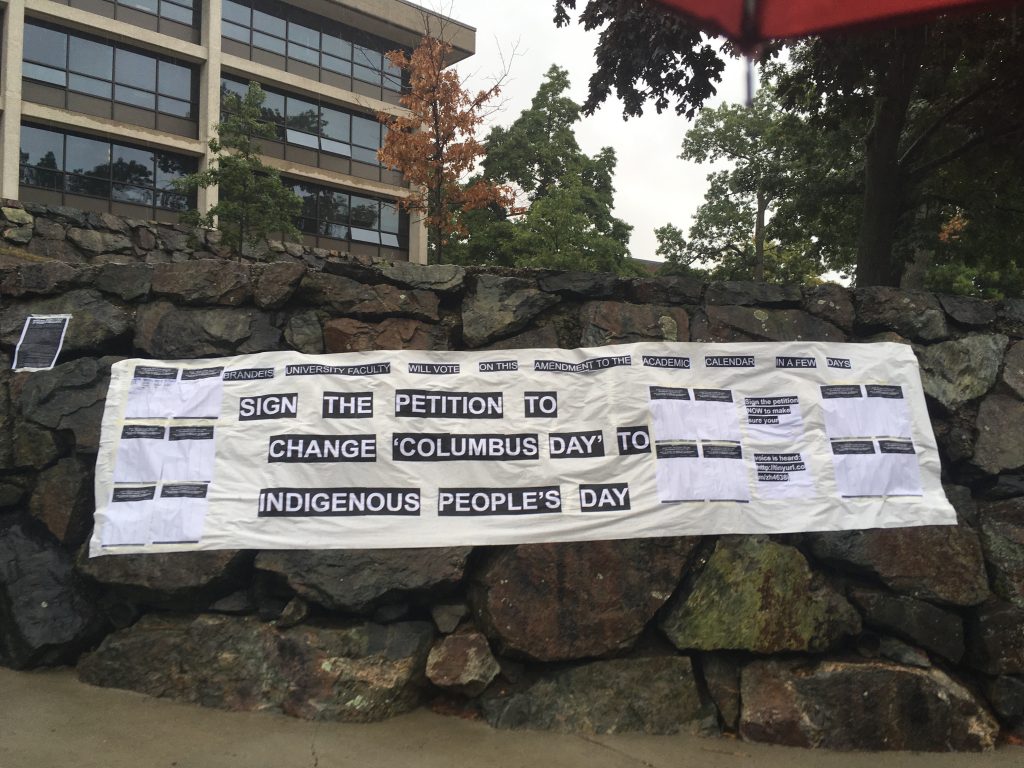 Goals of the movement include reexamining Columbus’ legacy, celebrating indigenous cultures, increasing “recognition of Native Americans at Brandeis” and creating a move inclusive campus, according to its Facebook page. Students have been posting on social media throughout the week encouraging others to sign the petition. Others, such as Brandeis Students for Reproductive Justice, the Brandeis Asian American Task Force and the anthropology department, have expressed support.

“The current name favors a Eurocentric view of world history that heroizes the actions of an explorer funded by the Spanish empire, while the proposed name highlights the experiences and perspectives of the indigenous peoples of the Americas, whose role in the historical process continues to be silenced and marginalized,” reads a statement from the anthropology department.

Hannah McCowan ’19 is from the Tiqua tribe and said Columbus Day is disrespectful to Native Americans, who have been killed and erased throughout history.

“As I grew up, I became more aware that those people were my ancestors and were slaughtered and moved to reservations where much of my family lived until about 50 years ago. There’s this picture of my great grandfather … he’s a little boy and is dressed in traditional dress for our Native American tribe and is dancing for a large group of white tourists. It breaks my heart that he was on display like that. I think there should be more awareness of how badly Native Americans have been treated and still are treated. It’s especially relevant with Halloween coming up because there are so many disrespectful ‘Indian’ costumes,” she said.

Other universities and cities across the country have replaced Columbus Day. South Dakota began Native American Day in 1990. Berkeley, CA, declared Oct. 12 a Day of Solidarity with Indigenous People in 1992. In 2015, Native American activists secured the celebration in nine cities including Portland, OR, St. Paul and Albuquerque.

The city of Cambridge adopted Indigenous People’s Day in June after a unanimous city council vote, according to The Boston Globe. Cambridge also created Italian Heritage Day on Oct. 1 after Italian-Americans said abolishing Columbus Day was disrespectful to their experience.

On the collegiate level, schools such as Tufts and Brown have transitioned to Indigenous People’s Day. After a year of campaigning, two resolutions passed by their student senate, 1,200 signatures on a petition and 50 public statements from student groups, Tufts faculty voted to make the change on Feb. 24, according to a press release from a Tufts senator.

At Brown, the change came in two parts. In 2009, the group Native Americans of Brown (NAB) campaigned to make the switch, but instead faculty approved the neutral term, “Fall Weekend.” This year, after another NAB-led movement and 1,100 signatures on a petition, faculty members voted to change the holiday to Indigenous People’s Day on school calendars, according to The Brown Daily Herald.