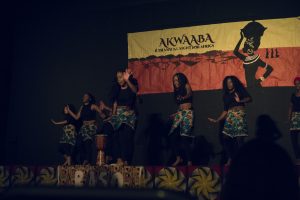 Featuring amazing performances from Brandeis students, as well as performances from dance teams from surrounding schools such as Boston University, the sixth annual Night for Africa displayed Africa’s great diversity and recognized the cultures in the African diaspora, Saturday, Nov. 12.

Brandeis African Student Organization (BASO) hosted the event for the sixth year. This year’s theme was Akwaaba, meaning welcome in the Akan languages of Ghana. The show was greatly anticipated among students, teachers and people from all over the city of Boston.

The greatly anticipated show began with an energetic performance by the yellow-and-blue-clad Fafali. The pounding of the drums along with the feet of the jumping dancers drove the crowd wild by the end of the performance and excited them to see what else Night for Africa had to offer.

Brandeis-famous Toxic took the stage to perform a dance to a compilation of “Fade” by Kanye West and “Caroline” by Aminé. With their quick yet eye-catching movements, they stunned the crowd with their sass and confidence. Representing African-American culture within the African diaspora, they truly blew the audience away.

Sankofa energized the crowd with vibrant West African dance that kept the audience cheering. They captured the audience’s attention as they danced across the stage with red, blue and purple lights shining on them throughout. Toxic then joined Sankofa in a dance-off of sorts where each dance team showed off their moves to the other. They ended by dancing the same choreography to “Run the World” by Beyonce.

LatinXtreme duo Abdiel Cabral ’18 and Vanessa Alamo ’17 represented the African diaspora in Latin America by stunning the audience with a flashy performance containing bachata and merengue, dances originating in the Dominican Republic. The colorful lights shone on the shiny sequins of their outfits as they spun and shimmied across the stage.

Boston University’s Afrithms made a presence on stage with a vibrant and enjoyable performance. Mixing both smooth and quick movements along with the afrobeats playing in the background, the talented dance team made sure not to lose the audience’s attention.

Hip-hop group Stop Motion then took the stage to show off their dance skills. They filled the stage with their breakdancing, jumps, turns and flips. They never failed to wow the audience with their creative and intense moves while keeping a smile on their faces, making it look easy.

With their performance representing Ethiopian dance, Abyssinia added a splash of color to the night. Their colorful outfits along with their bright smiles gave Levin Ballroom a whole different energy. Their bopping shoulders and quick feet left the crowd cheering by the end of their performance.

The eventful night ended with a fashion show that showcased various African flags and apparel. Models strutted across the stage, each carrying a flag from different African countries such as Nigeria, Zimbabwe, the Democratic Republic of the Congo and Ghana.

After the flag showcase, the models brightened the black stage as they strode across it in their bright and colorful casual apparel. Models wore shirts, dresses and skirts representing the apparel of different African countries.

The casual outfits were then replaced with dazzling and elegant formalwear. The models looked classy and fierce as they captured the audience’s attention from the stage. Outfits included sparkly purple dresses, bright orange blouses and gold-embellished skirts.

Night for Africa is a powerful show that displays the black talent on campus. Whether we are delicately but powerfully playing a violin, charming everyone with our voice, dancing with as much energy as Rebelle Dance Team, or stepping like Platinum Step Team, we have a presence on this campus, and Night for Africa accurately displays that.