How do we have sex after the AIDS crisis? This was only one of the questions that Prof. Tom King (ENG) and Susan Metrican (FA) considered at the first session of the Close Looking series at The Rose Art Museum. King and Metrican spoke to a group of about thirty on Wednesday about Carrie Moyer’s painting “Vieni Qui Bella” (which translates from Italian to “Come Here, Beautiful”) and how Moyer’s painting can be read in conversation with a few other works also on display at the museum. 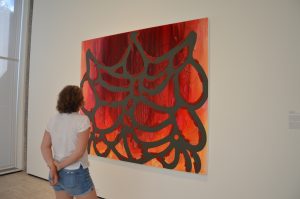 “Vieni Qui Bella” is a striking work that your eyes are drawn to immediately upon walking into the museum, even though it is on the opposite side of the room from the entryway. The background of the large canvas is a cascade of colors, almost like a sunset, starting with purple at the top, pink in the middle and finishing with orange at the bottom. Overlaying the canvas is a succession of gray loops, which look like the stitching of lace or a veil. As Prof. Dawn Skorczewski (ENG), one of the session’s guests, pointed out, the gray loops look like knitting or embroidery that is being pinned at the top of the canvas. All over these gray undulations are red cell-like blobs, which were referred to as bacteria throughout the talk.

King and Metrican began their discussion by elaborating on the context of the work and its name. Moyer dedicated the work to her wife, artist Sheila Pepe. She is the “Beautiful” referenced in the title. For this reason, King situated his discussion of the work in a feminist and queer studies reading. He described the painting as being a “seduction” of sorts, because Moyer dedicated the piece to her wife. Considering the bold strokes and striking red color scheme, the painting does have a seductive quality, both for its intended recipient and for the work’s viewers. In situating the work with the AIDS crisis, King also noted that the red, bacteria-like cells convey an element of disease.

Metrican said that in addition to the gray loops that resemble embroidery, they also suggest the shape of the human body. Considering these corporeal shapes and the bacteria cells, Metrican related the work to the HIV/AIDS crisis. And even though it was painted in 2016 and was dedicated to her wife, she described “Vieni Qui Bella” as “genderless, timeless.”

“Vieni Qui Bella” is a work from 2016, but King and Metrican also analyzed the painting alongside two other works in the Rose, both created at least 30 years ago. The first, “The Interior of the Heart,” was created from 1987-88 by Tim Rollins and KOS, or Kids of Survival—a group born from an after-school program that Rollins developed for at-risk kids in the Bronx. Also a massive work, even larger than “Vieni Qui Bella,” “The Interior of the Heart” deals explicitly with the HIV/AIDS crisis. Its background consists of a canvas of book pages ripped from “The Scarlet Letter.” On top of these pages are several scarlet “A’s” in various shapes, clearly alluding to the scarlet A worn by the protagonist in “The Scarlet Letter.” Many of these red As are distorted in shape, and one of them looks like an image of two people facing each other. Especially taking into account the year that the work was created, King noted how the painting symbolizes that having HIV or AIDS was like its own kind of “scarlet letter” that marked people during this time period.

The third work mentioned was Hannah Wilke’s “Needed-Erase-Her” (1974), which consists of a display of small vaginas molded from gray erasers. There are over 100 vagina-erasers, about an inch wide, lined up in rows on a tabletop under glass casing. King and Metrican discussed the wordplay of the work’s title—eraser, erasure and erase her. The work presents a social commentary on the simultaneous sexualization of women’s bodies and taboo of their genitalia. Women, and the agency of female sexuality, can be “erased” in society when their bodies become the topic of debate and politicization. The discussion also turned to as aspect of seduction like in “Vieni Qui Bella,” as “Needed-Erase-Her” presents sexual content through the ordinary, toned-down medium of erasers.

The Close Looking series is a collaboration between the Mandel Center for the Humanities, the Rose and the Robert D. Farber Archives and Special Collections at the library. Caitlin Rubin, Assistant Curator at the Rose, was present for the discussion.

“When you have other people come [into the Rose] with different backgrounds, you see other perspectives and it’s really exciting,” she said.

King echoed this, noting that “from a faculty perspective, it’s fascinating how people in other disciplines talk about or interpret different cultural objects… With the series, you can pair someone who knows art history with someone who knows literary criticism,” he said with a smile, referring to Metrican’s artistic knowledge and his literary theory background.

The Close Looking series is a great opportunity to get a more in-depth look at the artistic works that Brandeis has to offer, and hear faculty and staff perspectives on these works. The next Close Looking session will take place on Oct. 25 at 3:30 p.m. in the Archives and Special Collections in the library.