A crowd of students and community members filled the Shapiro Gym on the evening of Friday, Oct. 21, eager to see what the night would bring to them. The headlining act, alternative rock band X Ambassadors brought a high-energy performance that engaged the crowd from start to finish with hit singles, lesser knowns from their first album and brand new songs from their upcoming second record. 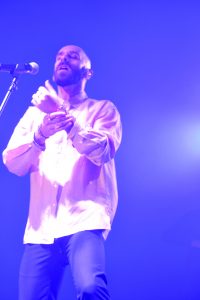 The supporting act, Great Good Fine Ok, a New York-based synth-pop duo, opened up the night with its uptempo, buoyant music. Frontman Jon Sandler’s high pitched voice and falsetto was strong, as it dominated the performance for most of the songs. Synth player Luke Moellman energized the room with his stellar solo on the keyboard. Delivering the group’s passion for music on the stage, the overall performance combined both the electronic and rock genres. This fusion of genres within the band’s performance engaged the crowd, leaving them prepared to hear more music.

A bit after 9 p.m., the anticipated act of the night walked onto the stage. X Ambassadors instantly grasped the audience’s interest in its powerful rendition of “Jungle,” a hit single the crowd knew well. Sam Harris’ authoritative vocal delivery as well as Noah Feldshuh’s energetic guitar solos let the audience know they were in for great show. The band maintained its vigor with its second song, “Loveless.” Even though “Loveless” is a non-album single, it solicited even more energy from the crowd. The same is true for the band’s performance of “Hang On.” Sam Harris allowed the crowd to sing with him as he motioned the crowd with the lyrics, “Put your old-found faith as though you got to hang on.”

X Ambassadors continued the with their brand new song, “Ahead Of Myself,” which serves as the lead single to their upcoming album. Through this particular song, Harris showed off his wide vocal range, reaching notes that were higher than anyone could have imagined. The band also performed a new song from its upcoming album that has not been released to the public, which added a personal touch to the relationship between the artist and the audience members, as we watched a performance that you simply could not get anywhere else.

Fall Flex tickets were $15, which is more expensive than previous fall concerts, but a bargain compared to the price of tickets for an X Ambassadors concert anywhere else. Typically, fall concerts are held in Levin, and though using the Shapiro Gym allowed for more students to attend, the show still felt far more intimate that what you’d get at a regular concert. 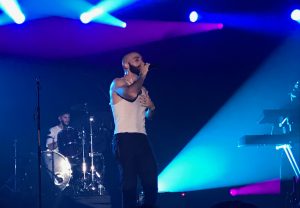 “Brandeis University, this next song is for you. You are gorgeous!” Sam Harris exclaimed to the crowd as the band broke out into “Gorgeous,” dedicating it to everyone in the room. While Sam introduced the rest of the band, each member broke out into impressive solos on each of their instruments. Sam’s brother, Casey, began a long, beautiful keyboard solo. Playing on different keyboards, Casey Harris’ improv solo was an extremely impressive piano break. Sam demonstrated his versatility as well, playing his guitar throughout the show, but he also performed an outstanding saxophone solo for the whole crowd. It served as a way to include classical and jazz music in the show, along with pop and rock.

X Ambassadors concluded its set by singing the band’s two biggest hits, “Unsteady” and “Renegades.” Sam hardly sang the opening line to “Unsteady”—he just let the audience fill in the lyrics. When an artist allows the audience to sing the song for them, it enhances the whole experience for the fans. It reflects how the artist is trying to personally interact with the audience, as they both sing the lyrics.

Before beginning to play “Renegades,” Sam Harris acknowledged that this song is dedicated to everyone regardless of who you are, your race, your religion or your sexuality. The band and audience celebrated this message by belting the song at the the top of their lungs. Sam Harris even went out into the barricades and into the front row of the audience near the bridge of the song.

Just when everyone thought the performance was over, the band came back onstage and completed an encore performance of another unreleased song from its upcoming second studio album. The performance incredible, and it added a personal touch to the show as a whole. When X Ambassadors walked off the stage, I left feeling energized and wanting more. The members of this band are extremely passionate about the music they play and were really engaged with their performance overall. If you were not able to attend Fall Flex last Saturday, I highly recommend that you go to one of Great Good Fine Ok’s or X Ambassadors’ concerts in the future, whether the groups come to Boston or your hometown.

X Ambassadors is an alternative rock band from Ithaca, NY. The members of the band consist of Sam Harris on vocals, Casey Harris on keyboards, Adam Levin on drums and Noah Feldshuh on lead guitar. Forming in 2009, the group did not get its big break until 2012, when Imagine Dragons frontman Dan Reynolds heard their song, “Unconsolable,” on the local alternative radio station in Norfolk, VA, where he was sick in the hospital. Reynolds asked his record label, Interscope, to sign X Ambassadors immediately. The band’s debut album, “VHS,” came out in June 2015, and spawned the hit singles, “Renegades,” “Unsteady” and “Jungle.” A year later, the band featured on a collaboration track, “Sucker For Pain” with Imagine Dragons, Lil Wayne, Wiz Khalifa, Logic and Ty Dolla Sign for the film soundtrack of “Suicide Squad,” which also became a immense hit throughout the United States, Europe and Australia.