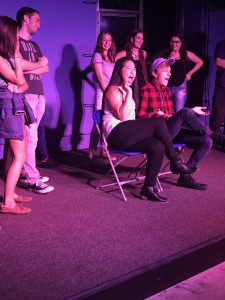 Members of the group played a game called “Translator” in which Hoisch and Hirshfield acted out their emotions but were only allowed to speak in gibberish. Meanwhile, Rosen and Rose each translated for one of the two. Hoisch and Hirshfield played each other’s prom dates in the skit. Hoisch motioned giving a gift to Hirshfield, perhaps a corsage, but then Rosen translated this to, “Got any mayonnaise?” “I brought it just for you,” Rose replied as Hirshfield gifted Hoisch the mayonnaise, to which Rosen exclaimed, “Look how many calories this has!” Rose responded, “That’s sexist,” to which Rosen replied, “I am sexist.” Rose said, “Well I hate myself,” to which Rosen replied, “I remember when I hated myself.” “Right now?” asked Rose. “No, not right now,” Rosen responded as he dimmed the stage lights to a bright red. “Mood lighting,” explained Rose. “You feel it too?” Rosen asked. Hirshfield, who was only supposed to speak gibberish, yelled, “Fuck it!” and shared a kiss with Hoisch. This game captivated the audience because Hoisch and Hirshfield would act out one thing without speaking, and then Rosen and Rose translated these actions into something completely different and random, like mayonnaise.

Both the alumni and current members of TBA performed with smiles and jokes galore, as the three alumni comedians came back into the spotlight.

TBA will compete in the College Improv Tournament, hosted by Chicago Improv Productions, where over 100 American and Canadian teams go head-to-head in 14 regional tournaments across the country.