Afghanistan, Bangladesh, Bhutan, Maldives, Nepal, Pakistan, India and Sri Lanka—all these beautiful cultures were celebrated at the South Asian Students’ Association’s (SASA) most anticipated event of the semester, MELA 2017. This year’s theme was “Masakali,” which translates as a dove symbolizing love, peace, hope and liberation. These themes were wholeheartedly embraced throughout the evening, sending positive and uplifting messages to everyone in a packed Levin Ballroom, on Sat, Nov. 18.

The room teemed with eager students and community members as well as overjoyed SASA members. But the room itself was also stunning. The backdrop had a grand reveal at the end of the e-board dance, which was short but sweet and a perfect way to set the mood for the evening. Pink sparkling flowers, gold glittering doves and a dazzling silver bird cage covered the giant backdrop that faded from light blue to black. A brown tree, “Masakali” and “Dare to Fly” also coated the ombré background. Additionally, an illuminated banner reading “MELA 2017” hung from the foot of the stage. The decorations were beautifully crafted.

Glitter aside, MELA 2017 featured impressive dancing, with performers who truly knew how to dance and excite the crowd.

Throughout the night, each class year presented its own complete dance number. If the audience underestimated the freshman dance because its participants are newest to the SASA, they were mistaken. The freshman dance started the night off strong. Snapping, pounding on the ground and clapping, the freshman performers dressed in gold and yellow came to impress.

The sophomores brought the energy from the get go. Flecks of gold and blue danced across the stage in fast-paced motions and to a heavy beat. The junior dance toned it down a bit. The red lighting gave the performance a cool flair.

Last but not least in the class year performances, the seniors flooded the stage with extreme pride, passion and enthusiasm. The dance started slow, but eventually sped up and concluded with the seniors posing all together with a cute sign saying “Seniors up, up & away!” 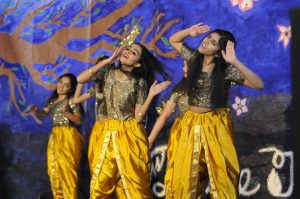 In addition to the freshman, sophomore, junior and senior performances, several other dance troupes took to the stage to wow the audience. Members of the Classical Indian Ensemble traveled across every inch of the stage wearing bells on their ankles. There were slight but sharp movements and as the music gradually became faster, the group matched the music’s pace and stayed on beat.

Brandeis Bhangra flew across the stage to western hip hop beats and eastern dhol rhythms. The performance involved several different geometric formations that allowed the group to command the stage in a very effective way.

Hip hop dance group Stop Motion seriously energized the crowd. Using the entire stage space and staying in sync, Stop Motion was amped up from the start. They danced to throwback hip hop classics like “OMG” by Usher ft. Will.i.am and “New Flame” by Chris Brown ft. Usher and Rick Ross, among others, which the audience received with excitement.

Bollywood Fusion dance team Chak De! blended dance styles from India and the United States in what turned out to be an incredibly entertaining dance production with a storyline running throughout. The dance illustrated the relationship between a mother, queen of the kingdom, and her daughter, a princess who resists her royal responsibilities. During a battle scene, dancers split the stage to show the divide and stomped to the beat. High kicks and fluid movements packed a punch, and of course, the queen and princess ultimately settle their differences. Chak De! left audience members wanting to see more.

The Stud dance, consisting of five upperclassmen male students, let loose in towels, pajamas and sweatpants, with rainbow strobe lights shining upon them. It might not have been the most in sync, polished dance of the evening, but the dancers clearly had fun with it and so did the crowd.

In addition to the duet, a band called OTO, made up of Brandeis SASA alumni, incorporated their South Asian backgrounds with hip hop. Blending the two together resulted in a memorable piece about liberation. “Waiting on you setting me free,” was repeatedly sung in the smooth chorus alongside a catchy beat. It was nice to see how SASA fosters such a tight-knit community where alumni want to continue to be a part of the cultural group.

Another highlight of the night was SASA’s fashion show, where SASA members showcased the latest South Asian trends. Flashes of gold, emerald green, burgundy, royal blue, orange, pink, yellow, purple, black and white mesmerized the audience in an upbeat, free-flowing, bright runway show. It was enlightening to be exposed to South Asian style on top of South Asian dancing, music and meanings.

Charity Pro Bono Counseling Project, which strives to provide mental health care access to those who might not be able to get it, presented at Mela. Presenter and SASA co-president Mrudula Gadgil ’18 discussed the need to shed more light onto South Asian mental health and the stigma around it. SASA collected donations for this charity all throughout the evening.

Dean of Students Jamele Adams also made an appearance on stage, performing slam poetry connected to the theme of the night, “Masakali.” Adams’ powerful verses were delivered with exceptional intensity and conviction. It was nearly impossible to receive his message on liberation and perseverance without getting chills.

What was perhaps most touching were the the co-presidents’ speeches given towards the end of the show. SASA co-presidents Vishwanath and Gadgil thanked everyone for attending. A few e-board members also took the time to express their gratitude to the co-presidents. It was easy to see that SASA has created such a warm, welcoming, genuine community at Brandeis and beyond.

MELA 2017 was a night to remember and it couldn’t have been so without the help of emcees Taminder Singh ’20, Farzana Parveen ’19 and Rebecca Cohen ’19. The trio’s games, spiels, interactive activities and frequent witty banter thoroughly entertained audience members and tied the show together seamlessly. Dancing, singing, laughing, emceeing, learning and celebrating galore, MELA 2017 was a massive success that could not have been a better way to wrap up this year’s I Am Global Week.