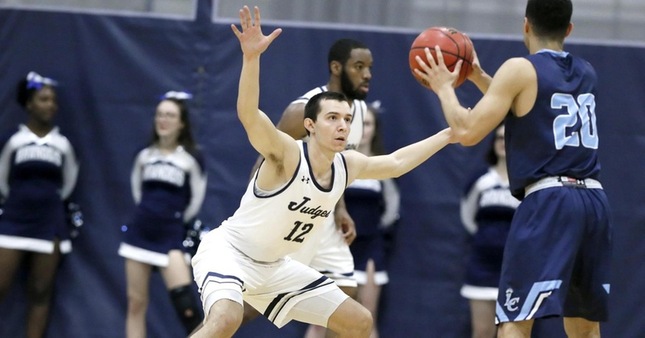 The Judges hosted tough matchups against the University of Chicago and Washington University in St. Louis this past weekend at home in Auerbach Arena, winning against the former and losing against the latter, both by a one basket spread. After the two games, Brandeis’ overall record falls to 10-6, standing at 3-2 in the UAA. This leaves the men in second place in the conference, tying with three other UAA teams.

On Friday night, the Judges faced the Maroons of Chicago, fighting in a close competition that was pushed beyond regulation and into a thrilling overtime win. Brandeis built an early lead, causing the Maroons to trail by as much as 11 points during the first half of play. This hot start was pioneered by Lawrence Sabir ’21, who scored nine points early, helping Brandeis to shoot 54.2 percent in the first. The lead was cut to six by halftime, however, with the Judges still remaining ahead by a score of 31-25 before the second half of the game. Again, the Judges jumped out quickly on their opponents, going on a 9-2 run to open the second half of regulation. From here, the Maroons took over to start an offensive run for themselves, outscoring Brandeis in a 34-28 fashion that produced a tie by the end of the game. In overtime, Chandler Jones ’21 came out firing, hitting a quick three-pointer to force an early lead for the Judges. Chicago came back to answer with a three of their own and continued to build a two-point lead over Brandeis. Then, it was Collin Sawyer ’20 who took over for the Judges. He scored the last five points of the game, hitting a two-point basket off of a steal from Jones and then hitting the game-winning three with 10.1 seconds left in overtime. Brandeis went on to defend the Maroons well for the last possession of the game, sealing their hard-fought win. Overall, Corey Sherman ’19 led the Judges offensively with 19 points, Sabir and Sawyer each had team highs of six rebounds, and Sabir led with five assists.

In Sunday’s contest, the Judges faced the Bears of Washington University in a battle for the number one spot in the conference, but fell short in a 53-50 loss. Despite a slow 7-0 start lead by the Bears to open up the game, Brandeis fought back to lead Wash U by five going into the second half, with a three from Sherman and a layup from Sabir at the buzzer. The Judges continued to build their largest lead to ten points with a score of 34-24. The Bears responded with a spark on offense, however, tying the game at 48 points with about three minutes left in the game. From then on, Wash U led Brandeis, forcing a loss for the Judges on a slim margin of just three points with a final score of 53-50. The Judges had balanced scoring, as Sawyer led with ten points, and Jones, Sherman, and Latye Workman (GRAD) each adding in nine of their own.

Despite falling to Wash U, the Judges’ victory over Chicago has propelled them to a ten-win mark in the season for the first time since 2013-14, a great improvement under new Head Coach Jean Bain in his first season at Brandeis. This upcoming weekend, the team goes on the road looking to improve their record against Emory University on Friday and the University of Rochester on Sunday.