Brandeis Buddies and SPECTRUM collaborated to host the powerful “Spread the World to End the Word: I Am Not My Stereotype” coffeehouse at Chum’s Thursday evening, March 5. The event featured performances from a capella groups, slam-poetry and speeches from self-advocates, aiming to end the use of the R-word and promote respect of people with disabilities. The coffeehouse was cosponsored by the Lurie Institute for Disability Policy and was part of the Special Olympics’ national “Spread the Word to End the Word” campaign. 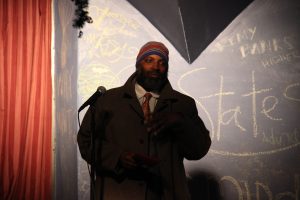 The theme of the event was the effect of stereotypes on the people they described. This motif was common throughout the videos shown during the event, the slam poems performed and the speeches given. In the first video, students were seen holding signs first with the stereotypes they have been associated with, then with the ways that they defy them.

The event began with Dean of Students Jamele Adams performing his slam poem “Ability.” In his performance, Adams expressed his feelings about diversity and the need for respect for people with different abilities. He had the audience repeat after him “The R-word is not our word. We are not your invisible people. Our shadows follow the sun. We are everyone … A spectrum.” 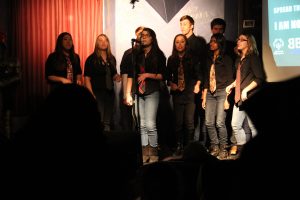 Michael Plansky, founder of the non-profit You’re With Us!, was one of the first to speak at the coffeehouse. Plansky was inspired by his son, who has cerebral palsy, to create a space where people with disabilities can acquire social skills and transition towards adult life by being matched with able-bodied college students. He explained his son’s influence on his life and told the audience the profound effect of words. “The word is not going to be the R-word anymore, it’s going to be the I-word. All you’re going to be hearing is ‘inspiration,’” Plansky argued.

One of the slam poets was Rohan Narayanan ’18, who performed two poems. His poem, “Words,” written for the event, discussed his childhood experiences with stereotypes. He told this story, saying, “Words can be daggers, we only push them into the skin, never understanding when to pull them out or bandage the skin … I wear a sweater of stereotypes put together by the words I got called from fourth grade ’til now.”

Also performing were student a cappella groups Manginah and Rather Be Giraffes.

Leah Igdalsky ’14 proposed the idea of hosting a “Spread the Word to End the Word” campaign to Brandeis Buddies and SPECTRUM last year. Together, they hosted Brandeis’ first event last March, and this year they included the Lurie Institute in the process. Igdalsky, who now works for the Lurie Institute, helped make this years event possible by working together with the Institute and the two Waltham Group programs.

About this year’s event, Igdalsky says, “I’m really excited that this year’s event highlights the individuals behind stereotypes. I think it’s so important to remind people that behind every stereotype or negative language they use is a person just like them.”

“Spread the Word” is a collaborative effort of the Special Olympics and Best Buddies International. Since its founding in 2009, the organization has held an annual day of awareness. This day, which is usually held on the first Wednesday in March, aims to increase consciousness about the harmful effect of the R-word on people with intellectual disabilities. Many celebrities, including Jane Lynch, Paula Dean and Al Roker, have signed the organization’s pledge to stop using the R-word.

“I hope that this campaign shows people that using inclusive language is a great first step, but not enough,” Igdalsky argued. “We really want people to learn from this campaign that people with disabilities are people just like them. Instead of just noticing the differences between yourself and a person with a disability, why not noticing what you have in common?”