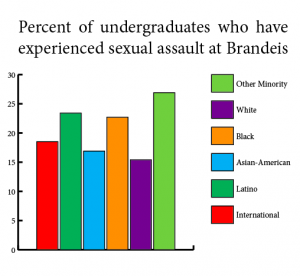 Brandeis released an analysis of the 2015 Campus Climate Survey on Sexual Misconduct on March 18 based on race and ethnicity and international status.

The Task Force for Sexual Assault Response, Services and Prevention administered the survey during the spring 2015 semester. The task force was established at Brandeis in 2013 to assist the university in preventing instances of sexual assault on campus.

Survey results were then compiled into a 19-page document attached to the email, which Interim President Lisa Lynch sent on March 18. The results found in the report were broken down into the same eight categories as the original survey results. These categories include the number of students who have experienced sexual misconduct, the number of students who report their experiences and students’ knowledge of campus resources.

Students were questioned on behavioral trends that they might have experienced at Brandeis, in both academic and social settings, involving sexist, racist, homophobic or generally pressuring remarks.

At the undergraduate level, international students were less likely across the board to have experienced instances of offensive jokes or other remarks, according to the report. Conversely, Black students had the highest reporting level of offensive speech on campus in all settings. Of Black students, 84.1 percent said someone had made “inappropriate or racist remarks” in their presence in a social setting.

The survey also questioned students on unwanted sexual behavior that was not labeled as “sexual assault.” Latino and black students more frequently reported affirmation to the statement, “Someone TRIED to put their penis or finger or object into my vagina or anus even though I didn’t want them to do so,” than did international, Asian-American or white students.
Minority students were also more likely to have experienced sexual assault, defined as including, “inappropriate sexual touching, fondling, grabbing or groping.” While 22.7 percent of black students and 23.4 percent of Latino students reported this, 15.4 percent of white students did.

Also in this section, the report indicates 83.3 percent of Latino students and 74.1 percent of white students told someone (not a formal report) about their experience. Other minority, black, Asian-American and international students reported instances of sexual misconduct 70 percent, 58.8 percent, 58.2 percent and 57.1 percent of the time respectively.

The results were similar among graduate students, with white and international respondents feeling the greatest sense of community and Asian-American, Black and other minority students feeling the least.

White undergraduate students were most likely to know where they could report misconduct, and what campus services are available in situations of sexual misconduct. Black and Latino students were the least likely to know. Asian-American graduate students were most likely to know where to access these resources. This section was not based on answering questions that were definitively right or wrong about campus services, but again asked respondents to assess their confidence levels of their knowledge of these resources. This was also asked of specific resources and assessed a respondent’s confidence in where to find the Office of Prevention Services, the Psychological Counseling Center and more.

The Task Force for Sexual Assault Response, Services and Prevention also announced that there are efforts underway for Brandeis’ senior leadership to receive training regarding sexual misconduct and to educate all TA’s in sexual misconduct issues. Additionally, the Rape Crisis Center hotline is now active and the Rape Crisis Center has created an online resource for students to visit to find information reporting and other resources. Brandeis will hold an open forum to discuss results of the study on April 5 from 12 to 1 p.m. in Sherman Function Hall.