At the Nov. 7 ’Deis does Citizen Science event, 55 students participated in a public discussion examining the ecology of herring migration and counted herring in a virtual data sprint as citizen scientists to support the Mystic River Watershed Association (MyRWA).

Guest speaker Patrick Herron, executive director of the Mystic River Watershed Association, held a lecture on environmental issues threatening the watershed and on one of the organization’s programs, the Herring Monitoring Program. 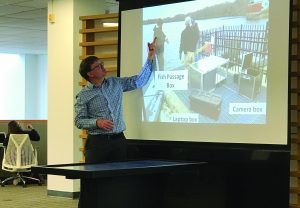 Before 2011, the DCR Upper Mystic Lake Dam blocked river herring migration to the upper lake, but in 2011, the Upper Mystic Lake Dam Rehabilitation project created a fish ladder, allowing passage for the species. Using the newly built ladder as an opportunity for monitoring, MyRWA installed a camera to count the population numbers of herring. According to MyRWA’s website, in 2017, volunteers counted a record number of 91,997 herring across 81 days and 791 counting slots.

After the lecture, students and volunteers gathered for the Virtual Herring Count, which helped MyRWA approximate the number of fish swimming past a certain point in the river. As citizen scientists, students watched 802 videos and counted 13,681 fish at the close of the data sprint.

Students participants included those in Biology 23a: Ecology, the Sustainable Brandeis’ “Save Ohno” challenge, and the general student population. In an email sent out to all participants, Liam Garvey ’18, a teacher assistant for Ecology and an environmental science major, wrote that they exceeded their goal of 500 videos by the end of the event.

The Virtual Herring Count allows MyRWA and the Massachusetts Division of Marine Fisheries to estimate the total herring population in the Mystic River and to form trends across the Commonwealth according to MyRWA’s website.

“Mystic River is a densely populated watershed. There are a lot of watersheds in Massachusetts, but this one only takes up about 1 percent of the land and has about 7 percent of the people living there,” Herron said.

“Many of its communities have a lot of environmental burdens because of the industry located there. So we have this interesting watershed that is a very human complex but also a wild ecosystem at the same time,” he continued. “We have dual mission of looking out for the environment and the people living there.”

Colleen Hitchcock (BIOL), assistant professor of ecology, helped organize the ’Deis does Citizen Science event. Hitchcock has been a longtime advocate for citizen science on campus, according to Garvey.

This semester’s event allowed Hitchcock to get the word out about citizen science. With an academic interest in the role of citizen science, Hitchcock plans to organize citizen science events in the future in collaboration with the Brandeis Library once per semester.

“In the spring, Environmental Studies at Brandeis [will be] part of a team of organizations sponsoring a regional citizen science project called the City Nature Challenge which will have opportunities to engage the Brandeis community in field research both on and off campus via iNaturalist,” she wrote in an email to The Brandeis Hoot.

’Deis does Citizen Science was co-sponsored by the Environmental Sciences Program and the Brandeis Library with the support of the Biology department and the Brandeis Maker Lab. It was funded by an Experiential Teaching and Learning Grant to engage students in the service of citizen science.