As we are approaching the end of the regular season in the Euroleague, all eyes are on the Turkish giants Fenerbahçe Beko with their nine-game winning streak giving them the best active streak in the Euroleague. Although Fenerbahçe is the only team who has shown up in the last five Final Fours (excluding the 2020 Final Four that was canceled because of the coronavirus pandemic) and were crowned champions in 2017, a winning streak this long was still unexpected of them due to one reason: the departure of the Serbian coach Zeljko Obradovic.

The European basketball legend Zeljko Obradovic served as the head coach of Fenerbahçe between 2013 and 2020, winning 10 domestic cups and participating in the Final Four five times, winning the European silverware once. The Serbian coach is no stranger to international success as he won the Euroleague trophy nine times with five different teams. Obra, as fans all around the world called him, departed ways with Fenerbahçe after the club president Ali Koç decided to downsize the basketball branch with the budget nearly halved. So, despite all the odds against them, how did Fenerbahçe manage to preserve its quality?

Zeljko Obradovic was replaced by another Serbian whose name is familiar to American fans. Coach Igor Kokoskov made his return to the Old Continent after nearly 20 years of service in the National Basketball Association (NBA). His journey with Fenerbahçe marks the beginning of his European club career as this is the first time he is head-coaching a European team.

The season did not start well for Kokoskov’s team. After two consecutive wins in the season opening, Fenerbahçe lost 10 of their next 13 games, facing disastrous defeats against Spanish teams Baskonia, Barcelona and Real Madrid. At the end of Round 15, Fenerbahçe ranked second to last in the standings, only topping Khimki Moscow. Fenerbahçe’s Round 16 match-up against Olympiakos marked the beginning of their gigantic winning streak. The game also clearly displayed that Kokoskov’s mentality as a coach was changed.

After 20 years of service in the NBA, Kokoskov had a hard time adapting to European basketball. While the NBA is focused more on star power, success in the Euroleague depends on the coach’s ability to find a unique role for each player on the roster. Early in the season, Kokoskov displayed the characteristics of an NBA coach. His game plan focused mainly on Nando De Colo’s playmaking and scoring ability, he stuck with the rotation he had in mind instead of rotating according to the game and aimed to use the ball quickly rather than correctly. All these methods can pay off in the NBA but Euroleague is all about teamwork.

As time went by, Kokoskov adapted his tactics to European basketball. “Coaches need to be flexible, if you adopt strict basketball rules, the ‘either my way or the go’ motto won’t work,” the Serbian coach stated in a recent interview with Eurohoops.com.  Kokoskov’s openness to flexibility allowed him to start the longest active streak in the league, as Fenerbahçe built a system where every player on the roster mattered.

When Fenerbahçe decided to downsize the basketball branch, it meant the departure of a lot of high-profile players who had a crucial role in the team’s five-year success in the Euroleague. Players like Luigi Datome, Kostas Sloukas, Nikola Kalinic and Derrick Williams all left the Turkish giants in the summer of 2020. They were replaced by relatively low-profile players like Jarrell Eddie, Lorenzo Brown, Edgaras Ulanovas, Dyshawn Pierre and Danilo Barthel.

All of these players had little to no experience in the top division of European basketball. The only top-tier players that remained loyal to the club were the Czech center Jan Vesely (Vesely Airlines as fans like to call him) and Nando De Colo who had joined the team a year ago after a glorious five-year spell at CSKA Moscow. Kokoskov was normally expected to base his strategy on these two players and unsurprisingly that was what happened in the first half of the season.

As the games went by and Kokoskov’s mentality shifted from an American one to a European one, he recognized that the load on these players was enormous and both of them were unable to carry the burden. As Kokoskov began to explore other opportunities, Pierre evolved into a lockdown defender who also had a surprising talent to play one-on-one low post offenses, Jarrell Eddie improved his playmaking skills along with his unavoidable three-point threat and Lorenzo Brown enhanced his defending skills as well as perfecting his offensive threat as a combo guard. With all the players on the roster finding a way to contribute to the team’s success, the results that the fans were desperately expecting started to come. Another factor that contributed to the Turkish giants’ success was the mid-season signing of the former Memphis Grizzly Marko Guduric.

After two years as a Memphis Grizzly, Marko Guduric returned to Istanbul where he grew to be an NBA-level shooting guard. It is no coincidence that the Round 16 match-up against Olympiakos that started Fenerbahçe’s winning streak marked the beginning of Marko’s second spell at Fenerbahçe. His arrival changed the way Fenerbahçe shared the ball and helped Kokoskov to advance his team to the next level. Before Guduric, Nando De Colo was the only guard on the roster capable of shaping the sets and distributing the ball. A one-dimensional game like this was easy to defend for the opponents, as pressuring De Colo basically meant blocking the Fenerbahçe offense. Guduric’s arrival not only added an extra shooting threat to the team but also took some of the burden off De Colo’s shoulders and improved the French guard’s game. With all three guards (Brown, De Colo and Guduric) sharing the ball equally helped Fenerbahçe’s offense to gain diversity. 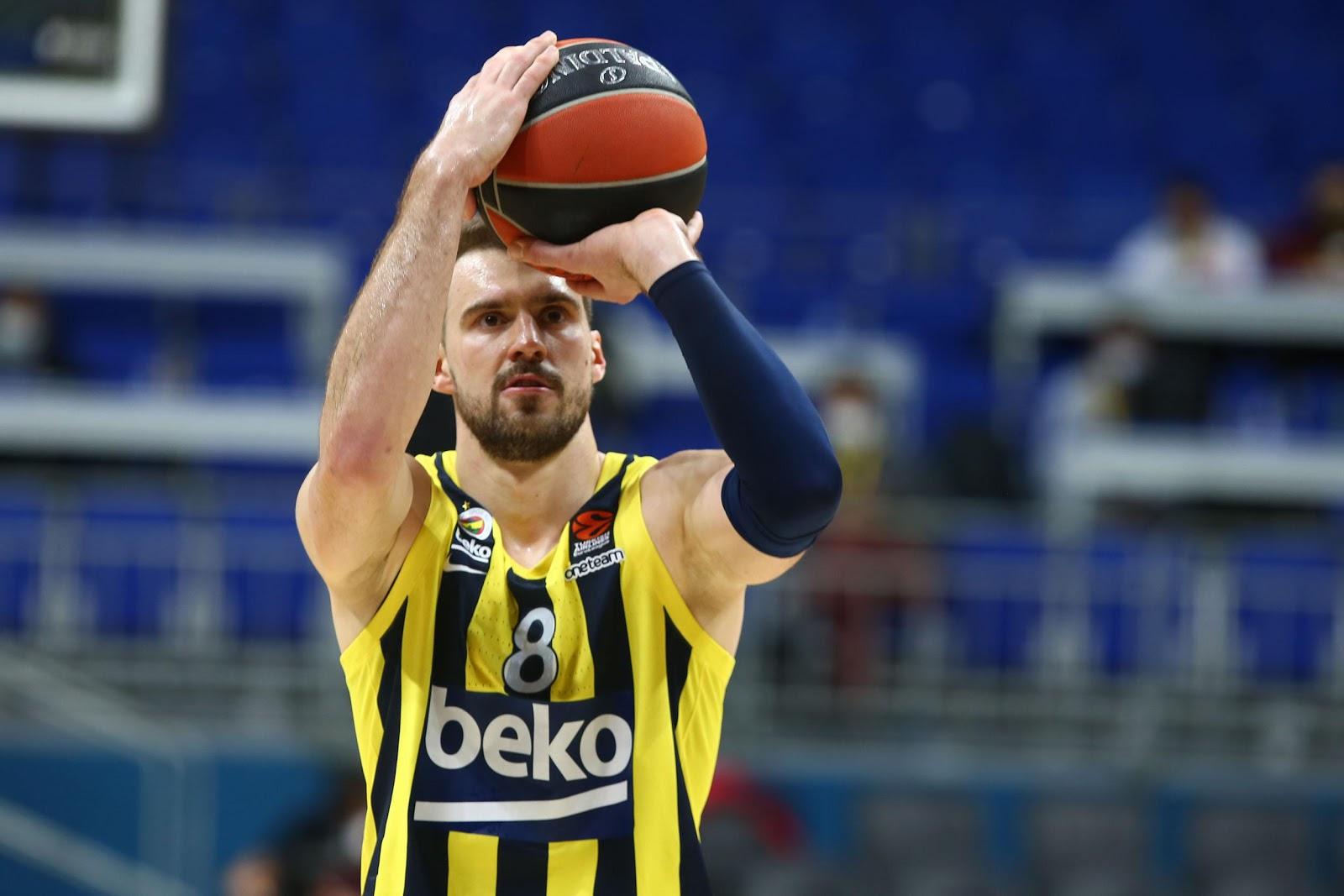 There is one last thing that should be mentioned while discussing Fenerbahçe’s success and that is the leadership the duo of De Colo and Vesely has shown especially during the second half of the season. The duo had a combined average Personal Index Rating (PIR) of 39 during Fenerbahçe’s winning streak, however, their contribution to the team is not limited to stats.

Being the most experienced players on the squad, even more experienced than the coach, their input as leaders was vital to the team. Although their contribution was negligible in the first half of the season as both stars coped with some injuries, their positive impact on the team is evident to anyone who followed Fenerbahçe for the second half of the season. Their influence peaked in the away game against the top of the league CSKA Moscow where the duo had a combined PIR of 70. In this streak, De Colo finally started to meet the expectations of the Turkish fans, while fan-favorite Jan Vesely ensured that his jersey will be hanging down Ulker Sports Arena’s ceiling when he finally decides to retire. 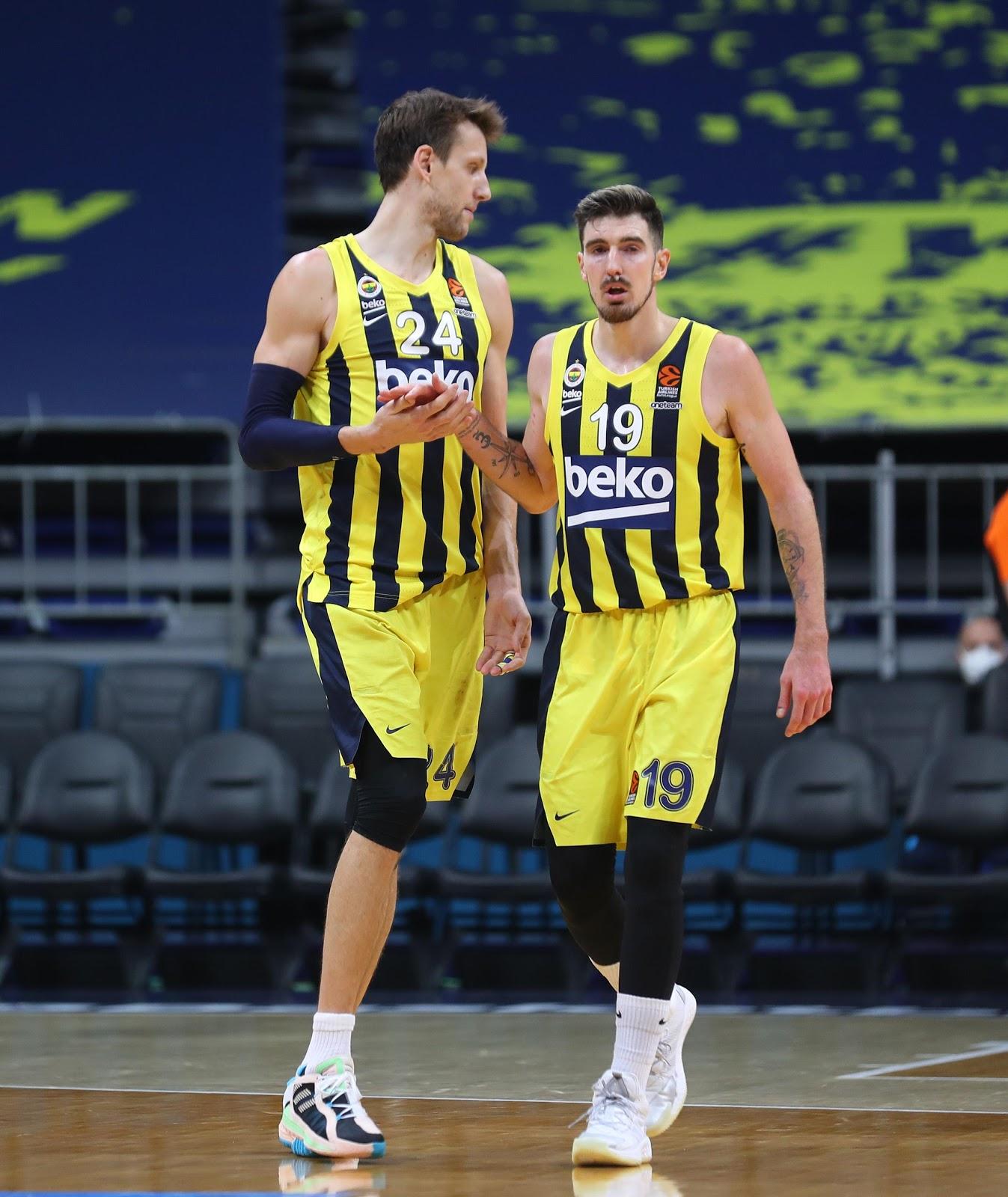 Fenerbahçe is currently ranked sixth in the Euroleague. To make it into the playoff round they have to finish in the Top Eight, where a Top Four spot means a home court advantage in the playoffs. With 10 more games to go, it seems very likely that the Turkish giants will be in the playoff round if they manage to keep this momentum going. After the playoffs, the Turkish side must fight to get a spot in what will be their sixth consecutive Final Four appearance.