The Brandeis baseball team concluded its season this week, going 1-4 in its final five games. Brandeis played a home and home against Tufts University, falling 16-4 and 12-3 on Friday and Saturday respectively. On Sunday, the Judges split a doubleheader on Senior Day against Suffolk University, winning game one 10-5 and losing in game […]

Since Brandeis left-fielder Sam Nugent ’23 arrived on campus his first year, he has made an immediate impact. Playing in every game since 2020, Nugent has a career 0.294 batting average and a whopping 0.419 on-base percentage resulting from his superior plate discipline and ability to foul off tough pitches. Nugent has been an excellent […]

The Brandeis Baseball team defeated two New England Small College Athletic Conference (NESCAC) opponents this past week, defeating Bates 4-3 on Friday in walk-off fashion and sweeping a double-header against Amherst 8-0 and 7-4. The Judges have won eight in a row and are 9-2 this season.   Friday, March 25: Brandeis 4 – Bates […]

The Brandeis Baseball team began its season last week going 1-2. Brandeis dropped the season opener to Anna Maria 8-6 on March 2. The Judges then defeated Babson 6-5 in 12 innings on Saturday and lost to Wheaton 14-4 on Sunday. All games were played at the New England Baseball Complex in Northborough, Massachusetts.    […]

The Brandeis Women’s Basketball team concluded its season this past weekend. Since the previous issue of The Hoot, the team has played six games, going 3-3. The team first went on the road, falling to Carnegie Mellon on Feb. 11 66-51, and defeated Case Western Reserve 61-58 on Feb. 13. Brandeis returned home the following […]

After four straight games on the road, the Brandeis Women’s Basketball returned to Red Auerbach Arena. The Judges hosted two of the top teams in the University Athletic Association (UAA), falling to Emory University 76-65 on Friday and losing to the University of Rochester 72-55 on Sunday. The Judges’ record is 6-12 and 1-8 in […]

After scoring a season-low three points last Friday in a 69-43 loss to Emory, guard Camila Casanueva ’22 was looking to bounce back. Casanueva certainly did that, scoring a game-high 21 points, including 11 in the fourth quarter, as the Judges knocked off the University of Rochester 66-59 on Sunday for their first University Athletic […]

For the first time in over 700 days, the Brandeis Women’s Basketball team traveled to play a game on the road in the University Athletic Association (UAA). The Judges played two games this past week, losing 64-58 to the University of Chicago on Friday, Jan. 21 and falling to Washington University in St. Louis 79-53 […] 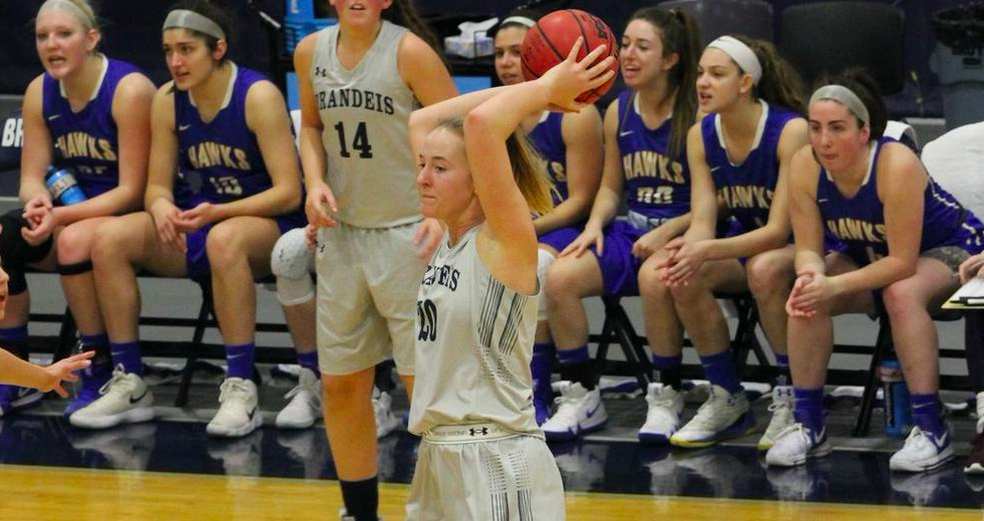 With three seconds remaining in the third quarter on Friday, Camila Casanueva ‘22 created an offense. The senior guard scooped up a deflected pass, took three dribbles to her left and drilled a step-back three as the buzzer sounded, igniting the Brandeis bench and the crowd.   Casanueva and the Judges defeated Wheaton College 52-48 […]

Heading into their final three matches of the season, the Brandeis women’s soccer team needed a strong showing to improve their chances to qualify for the NCAA tournament. The Judges defeated then-no. 18 Emory University 1-0 on Oct. 29 and the University of Rochester 2-1 on Oct. 31 on senior day. The Judges concluded the […]

With under two minutes remaining in the second quarter, senior guard Camila Casanueva ’22 had the ball in the right corner. She took a jab step, sending her defender back several feet and proceeded to hit a three, sending the packed house at Red Auerbach Arena into a frenzy.    Casanueva, the team’s leading scorer […]

Senior forward Makenna Hunt ’22 scored a goal and assisted another as the Judges cruised to a 4-1 non-conference road victory against Springfield 4-1 on Saturday. With the win, the Judges have won two in a row, and three of the past four. Brandeis now has a record of 8-4-2 overall and 1-3 in University […]

After outshooting Case Western 17-2 in 2-1 defeat Oct. 9 at homecoming, the Brandeis women’s soccer team traveled to the Midwest, where it faced its most difficult two game stretch of the season. The Judges, eager to earn themselves a tournament berth, bolstered their resume this past weekend, knocking off ninth ranked University of Chicago […]

Brandeis women’s volleyball are on a cold streak

Playing at Gordon Field for the first time in nearly three weeks, the Brandeis men’s soccer team lost to top-ranked Tufts 4-0 on Saturday. The defeat brings the Judges’ record to 1-4-1.    The Jumbos got off to a quick start, scoring in the fourth minute. Tufts would score again in the 21st minute and […]

Playing for the first time in nearly two years, the Brandeis Judges volleyball team opened their season at Red Auerbach Arena on Wednesday, defeating the Suffolk Rams in straight sets (25-14, 25-15, 26-24).   After convincingly taking the first two sets, the Judges clawed their way in the third set. Following a Suffolk timeout when […]

After seeing their eight-game winning streak come to an end, the Brandeis baseball team had two spectacular offensive performances as the team won both games during the week of April 18. The Judges defeated Framingham State University 21–11 on Sunday, April 18, and won 9–1 against Anna Maria College on Wednesday, April 21. With these […]