On Wednesday evening, Feb. 11, the university held a town hall meeting, “Free Expression and the University where outgoing President Frederick Lawrence gave a prepared speech on free expression followed by a question-and-answer session.

Lawrence first addressed the question of why protecting free speech is important. He says there are two primary ways to think about the issue, which he associates with Justices Louis Brandeis and Oliver Wendell Holmes. As these leaders dissented from the majority opinions of the court that restricted expression, they “played a significant role in developing what we think of as First Amendment jurisprudence today,” said Lawrence. 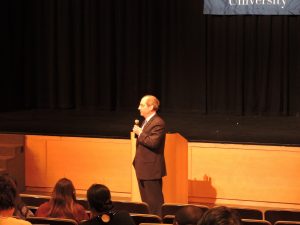 Their approaches, Lawrence explained, were actually quite different. Holmes supported free expression because he believed in a “marketplace of ideas” and that “through debate is how we get the best answers to the questions of our society.”

To articulate Brandeis’ views, Lawrence drew on the Supreme Court case Gilbert v. Minnesota concerning a citizen’s right to protest during World War I and whether the government could regulate this speech under the clear and present danger clause. Brandeis alone argued the speech should be protected. He said speech was the need for answers but the value of debate itself that necessitates freedom of expression. 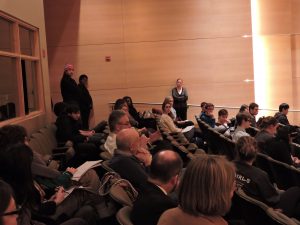 Honing in on Brandeis University, Lawrence explained how the two ideas come together on a campus where it is essential to debate and to search for answers. The need to protect speech “doubles on a university campus,” he said.

He mused on where the limits lie, stating they are “pretty far out on the cusp of expression,” and there must be a certain amount of extremity present to warrant restriction.How one can determine these limits, he asked, arguing one way to probe the question is to examine the speaker’s intent. 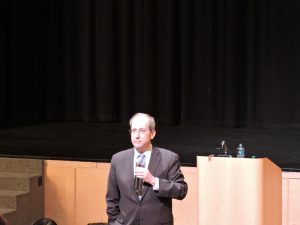 “If the intent is to instill fear, not to compound, not to debate, but to actually instill fear in another person, then that is a proper place … for the government to be involved in restricting expression,” he said.

The key is that people must find respectful ways to disagree, he said, rather than engaging in screaming matches and contrapuntal monologues, “where people talk past each other with no sense of engagement.”

Lawrence argued we must disagree in ways that do not diminish the value or intensity of discussion and should make a point to search for common ground. He spoke of an op-ed piece co-authored by a pro-abortion advocate and an anti-abortion advocate, in which they attempted to find the points on which they agreed.

When Lawrence opened the floor to questions, faculty and students challenged him on the campus climate and Lawrence’s own commitment to this principles

Professor Harry Mairson (COSI) asked Lawrence about the letter he wrote to the faculty regarding the “Concerned Listserv” in which he wrote, “Some remarks by an extremely small cohort of Brandeis faculty members are abhorrent.” Mairson called on Lawrence to explain his actions with great specificity, asking which comments he found “abhorrent” and who exactly comprised the said “cohort.”

Lawrence said he chose very purposely not to mention names, stating no one should be prevented from or punished for making comments. His email to the faculty was “designed to express my views. I know not everyone would agree, but it was designed to be part of that discussion,” said Lawrence.

A senior student announced that during the 2012 election, when he voiced support for the non-majority candidate, he “received numerous academic and workplace … disdains.” He asked Lawrence why this should be allowed to happen. Lawrence replied firmly that the classroom must be a place where all students feel comfortable speaking, but reminded the student that “the right to free expression is not the right to say things and not have people criticize them.”

Another student explained that she came to Brandeis because she believed it was an institution committed to social justice. She feels, however, there is a tension created when much of the school’s finances come from conservative Jewish donors “who want to silence voices … I feel like that might silence your voice as well,” she said to Lawrence.

Brandeis has a special relationship with the American Jewish community, Lawrence said, and said there can be tension, but affirmed that students and donors alike have the right to express themselves, but that the university will not allow anyone’s views to be silenced, rather he hopes for “respectful disagreement.”

Another senior broached the topic of Lawrence’s controversial quote, “We’re not here to protect you, we’re here to prepare you,” from the “Light of Reason” dedication ceremony in the fall, offering Lawrence the chance to give his side of the story regarding the school’s stance on sexual assault.

Lawrence stated his words were taken out of context and misquoted, clarifying, “I said the gates of this university are not meant for keeping the world out. We do you no favor if we say, there’s important issues out there but we’re not going to talk about them. We’re not here to protect you from that, we’re here to make you the kind of people who are going to change the world.”