Penny-jammed doors at Grad a security and financial problem

Brandeis has spent over $5,000 to repair locks on exterior doors of all four buildings at the Charles River (Grad) apartments that students have jammed with pennies or other objects. The Department of Community Living (DCL) announced Monday they would bill every Grad resident to cover the costs of repair, but DCL does not intend to bill students unless the problem persists.

DCL hopes the email will serve as warning and encourage students to stop jamming the locks, says DayShawn Simmons, the Area Coordinator for Grad and the Foster Mods. He confirmed they do not want to charge residents, but will have to explore this option further if the issue does not stop. 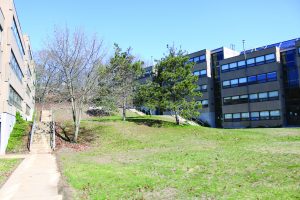 There have been at least 60 work orders this academic year, most involving coins, but also woodchips and other small objects that have been jammed into doors to stop them from locking. Repairs cost at least $30, requiring Facilities to send a locksmith to look at the doors, though individual incidents have cost as much as $120 when there was damage done to the door, according to Simmons. He estimates repairs costs have exceeded $5,000 this year. This number is increasing, with at least three more work orders filed since DCL sent the email on Monday.

The number of work orders also may not reflect the actual number of incidents, as police officers, DCL or Facilities staff can sometimes remove the pennies on their own, according to DCL. No students have been charged, and staff at Facilities and DCL reiterated that their primary goal is to stop students from tampering with the locks.

DCL staff said safety is their chief concern in this situation.

“In conducting health and safety inspections recently, the [Community Advisor] staff and I noticed that many of you do not lock your suite doors,” said Simmons in the email sent to Grad residents on Monday. “Having the swipe card doors propped and not locking your suite doors presents a serious security risk for our community.”

Grad is university-owned housing but is located off-campus, just under half a mile from the edge of campus by the Village. Safety issues involving indecent exposure, vandalization and other incidents of harassment have heightened concerns about student security this year.

After they were told they would be charged for the lock repairs, residents took to social media to express their frustration, arguing it was wrong for every resident to be penalized for the actions of a few students. David Lazarovich ’16 created a petition urging DCL not to charge residents, which as of Thursday has 95 signatures. Students who commented on the petition criticized the cost in addition to what they pay for housing, and one suggested Brandeis install security cameras.

Lazaravich said he would have preferred Brandeis charge residents to upgrade the security of the locks, rather than for repairs. He called on DCL to improve security at Grad, saying, “If DCL was seriously concerned about the security of Grad, they would have invested money… in security cameras.”

There are three security cameras at Grad, in the parking lots and along Charles River Road, but none that could capture students tampering with building doors, according to Ed Callahan, the director of Public Safety.

“A lot of times the administration puts band aids on things instead of actually going in and fixing or curing the problem,” Lazaravich argued.

When there is damage in student living areas that “cannot be attributed to specific party,” Brandeis has the right to bill residents of the area equally, according to Rights and Responsibilities. R&R prohibits students from tampering with locks, and states the “responsible students may be subject to financial charges and other sanctions.”

Valarie Timms ’16, the Senator for Grad and 567 South Street, is meeting with DCL director Tim Touchette on Friday to discuss the issue.

Last semester, residents of Ziv 127 had to pay $23 each to cover $2000 worth of repairs after someone cut wires damaging fire panels and the “opening arm of the electronic door mechanism,” according to an email from Touchette.