Professors and student groups gave presentations at the Indigenous People’s Day Teach-In, which was held in the Intercultural Center (ICC) on Monday, Oct. 10.

The purpose of the teach-in was to hold “a day of learning for the entire Brandeis Community focusing on Native culture, history and their struggle for social justice,” according to the Brandeis event page. 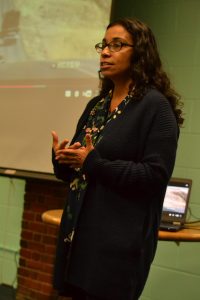 Madeleine Lopez, director of the ICC, stressed the importance of the teach-in, especially considering Brandeis’ lack of a Native American Studies program. “It is important that all of us gain a better understanding of the Indigenous Peoples’ experiences and activism,” she said in an email to The Brandeis Hoot. “The absence of a program should not preclude us from taking steps to educate ourselves and tap into the resources and scholars we do have here.”

The teach-in ran from 10 a.m. until 4 p.m. Most events were split into half-hour segments so students could easily “drop in” for 30-minute sessions and attend as many or as few events as they pleased.

Greg Childs, assistant professor of History, discussed the different phases of conquest models and how different eras of Native American history were defined in his presentation titled Sixteenth Century Spanish America: Conquest or Non-Event—A “Loser’s History” of the “New World.”

“If the 18th century is defined by epic history and tragedy, the early 1900s until 1950s is defined by the idea that the indigenous lose because of spirituality,” said Childs.

Among the different types of models, Childs noted that during the 1970s and 80s, people began facing a language barrier. Childs discussed how language creates a problem for conquest and posed several questions including, “How does language create a problem for conquest?” and “Do indigenous people realize this is a conquest?” Conquest was difficult between people who did not speak the language, leading to a period of miscommunication, stated Childs.

“After the conquests, after the initial battles, whether it’s Columbus or Cortes or Pizarro, what the Spaniards are looking at is a land in which they’ve subdued the natives, but the natives still practice certain cultural manifestations, certain religious practices that need to be extirpated,” said Childs. In the first 50 years of conquest, converting Native Americans was how the Spanish asserted control over the New World, he said. 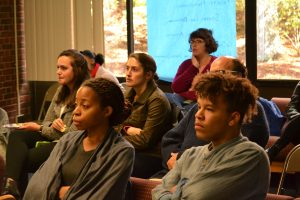 Professor Cristina Espinosa, associate professor at the Heller School, gave a presentation on the development and democracy of indigenous peoples. She spoke about how although there are 350 million indigenous people in the world—who make up 5 percent of the world’s population—they struggle to define their identity.

Brandeis Climate Justice, a student-run coalition encouraging and pressuring for climate justice, held a discussion at the teach-in about “Standing Rock and indigenous groups that are resisting various pipelines and anti-environmental actions in recent history,” according to the event page. Native Americans from the Standing Rock reservation are protesting the Dakota Access Pipeline which would flow through their water sources and under a sacred burial ground.

“The focus of our presentation was climate colonialism, which refers to the ways in which fossil fuel extraction and global climate change disproportionately harm indigenous communities and communities of color,” said Iona Feldman ’17, a member of Brandeis Climate Justice.

Feldman noted that as a climate justice organization, “It is important for us to hold ourselves accountable to our own professed commitment to stand in solidarity with those who are already being harmed the most by the actions of the fossil fuel industry.”

In addition to contributing knowledge to the campus discussion on indigenous solidarity, Brandeis Climate Justice hopes to expand the general conversation on climate change. They want students to recognize how closely it is related to oppressive institutions such as racism, colonialism, imperialism and capitalism, according to Feldman.

“I really hope there will be more opportunity to continue these conversations in months to come,” Feldman said to The Hoot.

Lopez was satisfied with the turnout for Brandeis’ first teach-in. “The faculty presenters provided a wide scope of historical, political and anthropological perspectives,” she said in an email to The Hoot.

“The Brandeis community participated enthusiastically. It truly was a day of learning.”

Brandeis faculty recently voted on Friday, Oct. 7 to change the name of the holiday from Columbus Day to Indigenous People’s Day, after a student coalition pushed for the change.