Thank you to our seniors 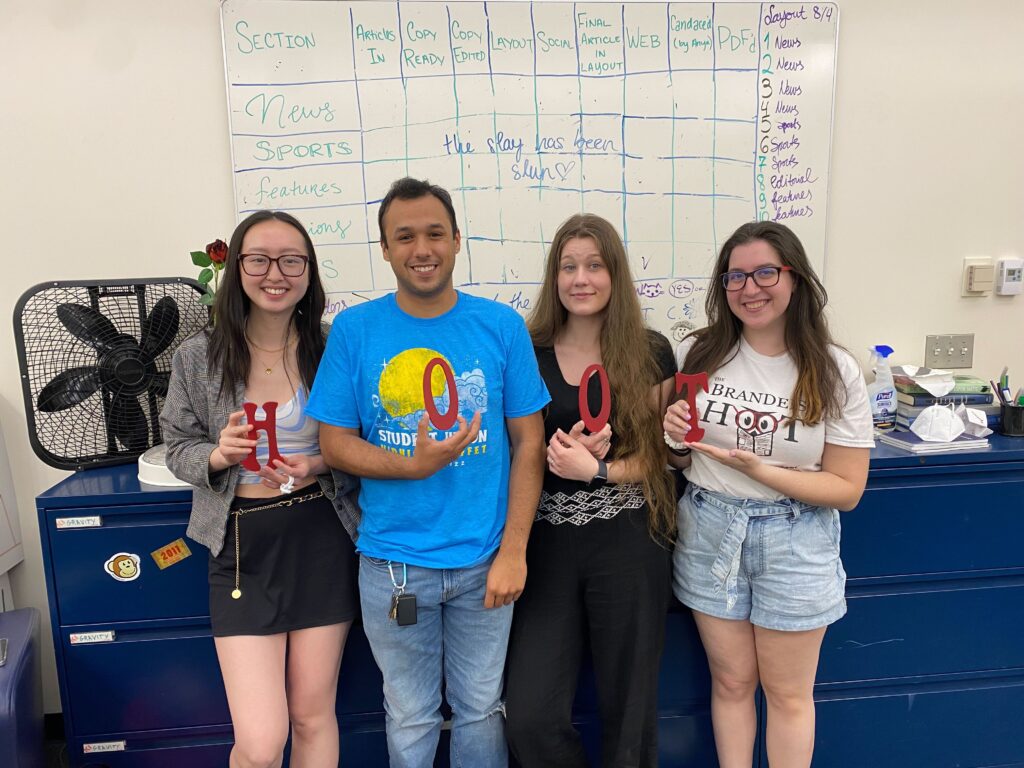 The end of the semester has come and we couldn’t send you off without saying how grateful we are for each and every one of you. Sometimes we get a little caught up in making the paper and we forget to say how thankful we are for the people who came before us and taught […]

A tumultuous but rewarding Brandeis experience

Needless to say, our experience at Brandeis was very unique and unlike many of the years that came before us, mostly as a result of COVID-19 and its unfortunate consequences that it has had on our college careers. Regardless, I would still like to emphasize the positive aspects of my Brandeis career, rather than the […]

When I took Sociology of Body and Health back in fall 2019, Professor Shostak assigned us a project to change one aspect of our bodily practices for a week and write an ethnography about the experience. So, not unlike many of my peers who chose to play around with colorful hair dye, fake piercings, or […]

On my brandeis experience: I am glad this is the end

It is now 5:22 p.m. on Thursday, May 5. The official deadline for this article was at 12 p.m.. The hard deadline (which I myself insisted on) was at 2 p.m.. And here I am, sitting here, not knowing what to say. I read the senior ops of the other seniors, hoping that they would […]

I sat down to write this intro a thousand times. Even though I’ve been preparing myself for this moment all year, I still can’t quite believe we’ve made it here. Yes, we: me, the rest of the Hoot editors, anyone who cares enough to read this, all the besties. I’ve known all year that I […]

‘Tis an honor being a geek with you all

When I was a silly sophomore who was just starting to use Instagram for the first time, I discovered the joy of social media stories. I used the Instagram Story feature liberally, mostly on my more personal Instagram page (not my main, which is strictly used for showing my associates and distant classmates how insanely, […]

Univ. shared Board of Trustees Report

University president Ron Liebowitz sent an email to community members with updates from the April Board of Trustees meeting. Liebowitz updated the community on multiple initiatives the Board of Trustees has undertaken.  The Board elected Lisa Kranc ’75 to a three-year term position on the Board, serving as a chair. Kranc held this position as […]

59 members of Congress need to be impeached

In case you haven’t heard, congresspeople are evil. Their terrible legislative decisions aside, 59 members of Congress have committed insider trading according to 15 U.S. Code § 78u–1. The statute says that if any person buys or sells a “security or security-based swap agreement while in possession of material, nonpublic information,” they have committed insider […]

BookTok worth it or not: the nots

For our final edition, I’m back and ready to go. Let’s get into it: I read books I find on BookTok, I review them, I tell you whether to read them or not. Except I realized in my last review that I have never written a review for my not list, and I deduced it […]

Based on the graphic novel series of the same name by Alice Oseman, “Heartstopper” very literally stopped the hearts of viewers when it was released on Netflix on April 22. The British TV show follows the lives of queer high school students as they come into their own, recognize their identities and grow as individuals […]

The Brandeis baseball team concluded its season this week, going 1-4 in its final five games. Brandeis played a home and home against Tufts University, falling 16-4 and 12-3 on Friday and Saturday respectively. On Sunday, the Judges split a doubleheader on Senior Day against Suffolk University, winning game one 10-5 and losing in game […]

To say ‘endings are hard’ is probably the greatest understatement in all of writing. A story IS its ending. Endings are the culmination of all the emotion and time and detail invested into the narrative; the greater tapestry revealed after all of the individual threads when been  carefully woven together. A good ending elevates a […]

Fairies, lovers and donkeys, oh my! “A Midsummer’s Night’s Dream” is one of William Shakespeare’s most well known plays, and this classic comedy was recently brought to Brandeis. Hold Thy Peace, Brandeis’s Shakespeare theatre group, put on a production of this play, directed by Sabrina Goldsmith ’25 and assistant directed by Laurel Davidoff ’25, from […]

With Roe v. Wade’s imminent nullification, 26 U.S. states are set to place bans on abortion. This blatant attack on bodily autonomy places more than half of U.S. states alongside the 24 other nations that have banned abortion entirely. When Roe v. Wade is overturned, it will be yet another human rights violation committed by […]

Brandeis students showcased the culmination of their summer and academic year research and creative projects at the annual Undergraduate Research and Creative Collaborations (URCC) Symposium. This is the Symposium’s second year, following last year’s virtual gallery format.   Director of Undergraduate-Faculty Research Partnerships Margaret Lynch commented on the transition from virtual presentations to this year’s […]

How does a low-budget horror film released through a little-known production company succeed in the mainstream markets? Well, it probably doesn’t. But “Hellbender” (2021) has all the qualities necessary to do just that.    “Hellbender” is a folk horror coming of age story about a teen girl, Izzy (Zelda Adams), kept isolated in the woods […]

Behind the scenes of Springfest, Brandeis’s biggest concert

It’s safe to say that Springfest is one of the most anticipated days on the Brandeis campus. It’s one of the few days of the year that Brandeis students are willing to go all out: from the fashion to the parties to the general positive vibes. But what goes on behind the scenes of Springfest? […]

The Athletics Department announced an initiative to raise money for the Barry Harsip ’73 student lounge. The new student lounge will be located in Gosman near the main entrance.  The lounge is named in memory of Harsip who was a member of the university’s men’s soccer team in the 70s Harsip was named to the […]

Judiciary gives ruling on Feng vs. Sourirajan and Coles

On Thursday, April 28, the Brandeis Student Union Judiciary released its ruling on the case of Feng v. Sourirajan and Coles. “In a vote following the hearing, the Judiciary found 5-0 that none of the alleged violations constituted a breach of conduct, and consequently Petitioner Feng’s resolutions will not be adopted,” wrote Chief Justice Eamonn […]