There was a discrepancy in number of candidates and voter turnout across the races in Fall Student Union elections, with results released early this morning. 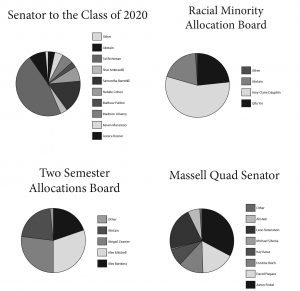 Voter turnout in the first-year races was higher than most of the other races. There were 397 first-years who voted for their class senator, according to voting data from the Student Union. 212 Massell residents and 159 North residents voted for their quad senator. There are approximately 840 students in the first-year class. More first-year students voted in this election than in the previous year, according to data from last fall’s election. In 2015, 248 first-years voted, more than 100 fewer than this year.

Tal Richtman and Samantha Barrett were elected Class of 2020 Senators with 136 for Richtman and 48 for Barrett. Aaron Finkel received 65 of 198 total votes cast. In contrast to the Massell Quad race, there were two students who ran for North Quad Senator. Jacob (Jack) Rubenstein won 69 out of 135.

Alex Mitchell ’17 and Abigail Zeamer ’19 were elected to A-Board for two semesters, with Zeamer taking 38.66 percent of the 763 votes and Mitchell taking 43.77 percent. Andrews Figueroa ’19 ran uncontested for

Three-Semester A-Board. He won 70.25 percent of the 773 total votes. Of the students who voted, 27.94 percent chose to abstain (meaning vote of no confidence). Three students were running for Village Quad Senator, and Charlotte Lang ’19 was elected with 50 percent of the 46 total votes cast.

Michelle Jimenez ’18 was the only student on the ballot for Ziv Quad Senator and was elected with 42 out of a total 80 votes. Tomi Molokwu ’18 received approximately half that many votes as a write-in candidate. There were 12 votes for abstain in the Ziv Quad race. Jose Castellanos ’18 (a columnist for The Brandeis Hoot), was the only candidate for Ridgewood Senator and won with 28 out of 40 votes.

There was no official candidate for the position of Foster Mods Senator. Ari Matz ’17 won the race with five write-in votes. However, Mod Cat garnered seven votes, technically winning the race. There were also no candidates for Charles River/567; Gaby Schwartz ’18 received six votes in the election, but abstain had 51.1 percent of the vote. According to the Student Union constitution, this means Schwartz would not win the seat because abstain had the majority. In the race for Off-Campus Senator with no official candidates, abstain had 41 percent of the vote, but this is not a majority and Nick Love ’17 was elected with seven write-in votes.