While Brandeis students are known for their engagement in community service, the Brandeis Prosthesis Club (BPC) literally gives a helping hand to those in need. This semester, the club has already provided two young recipients with prosthetic hands made in the on-campus, 3D printing MakerLab. 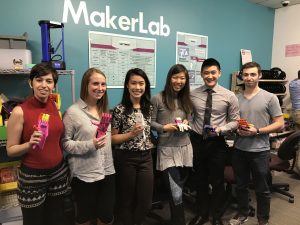 “The idea behind 3D printing for kids is that it’s a cheap alternative while they’re growing,” explained Alison Tassone, BPC’s Community Liaison. “Rather than pay thousands of dollars and have to get a new one every time they grow, they have these hands which we give them for free.” On average, the hands cost the club about $50 to produce.

“We work with an organization called Enable, and that’s how we find the recipient that needs a hand,” said Felicia Lee ’18, BPC President. She explained that once the club is paired with a recipient, the parents send the club measurements so they can custom fit the hand to the child receiving it.

Currently, the club has been working on building a hand for a five-year-old boy, Andrew, in Washington. Although they have already sent him three different models, each one fits him a little better. “The first one was a bit too small,” said Lee. “The second one we made a bit bigger, and the other one didn’t have the thumb because the kid already kind of has a functioning thumb, so we got rid of this part so his thumb could stick out, and he could use it.”

Even more advanced, some club members have been working on what is called Kinck Fingers. These are individual fingers that can be attached to whatever part of Andrew’s fingers are still there, explained Evan Thom ’18, co-vice president. “It will attach to a wrist band and pull the string, and it will contract,” he noted.

While the processes of developing the perfect hand take time, the skills learned to print and assemble can be learned quickly, said Rebecca Panitch ’18, also co-vice president. “You can honestly come into the club with no skills whatsoever and learn everything…Assembling is kind of a learning process for each hand we go through,” said Panitch, who noted that collaborating with other club members to figure out how to assembling the hands is one of her favorite parts about the club. “We kind of bond over it!”

Just a few weeks ago, the club sent out its latest version of prosthetic hands to Andrew—hands the club members call the “Iron Man Hands,” as they were made specifically to look like the red, gold and white hands of Iron Man. “Watching Andrew actually use his hand for the first time as he took it out of the mail…that was one of the best moments for me in this club because I’ve been here since the beginning and finally seeing someone actually benefit from what we do just is amazing,” said Thom. Andrew’s mom had sent the club members a video of Andrew opening the package and trying the hand.

While the club has been successful in building the hands, a big part of their mission is to spread awareness in the Waltham community and hopefully be able to connect with local recipients, explained Lee. To do this, the club has participated in many Waltham Group and other community events such as SPLASH, JBA, DEIS Impact, Stanley Family Night and Plympton Family Night.

“Usually what we do at those type of events is we print out several of these unassembled hands, and we have them actually go through the process of assembling it, and they get to keep the hands. For SPLASH, a day when Brandeis students teach classes on a variety of subjects to students from Waltham, BPC had participants make their own prosthetic hands.

“We had 15 high schoolers and middle schoolers, and we printed out 15 hands, and they all got to take them home at the end of the event,” said Lee. Ideally, as the word spreads about the club, they will have the opportunity to provide a hand for a local child in the community.

While the club is young, the leaders have high aspirations for the future. “Originally, one of the founding members had a project that she wanted to take on that we really haven’t had the opportunity to do yet,” said Panitch. The project, called HACKberry, is a prosthetic hand that uses nerve muscles to move the prosthetic.

“When you think you are going to move your hand, it sends signals to your nerve muscles and it will actually make your hand, based on sensor[s] and electrode[s], your hand will actually clench in response,” explained Panitch. Although this founding member was not able to pursue the project, it is something current club leaders—all but one of whom are neuroscience majors—potentially want to pursue. “I think that original idea of a project might have pulled in quite a few neuro majors [to the club],” noted Panitch.

In addition to the HACKberry project, the club has been in contact with a local veterinary hospital in Boston interested in acquiring prosthesis for animals. “They were telling us that there are some turtles and birds with broken beaks and shells … and vets are interested in getting 3D prosthetics for them,” said Lee, who noted the club plans to start working on this project next semester.

As the Brandeis Prosthesis Club continues to build hands for children in need of prosthesis and moves forward with their long-term projects, they invite anyone to join the club which meets in the MakerLab on Wednesdays from 8 to 9 p.m. “I just really liked [the] passion and ability to use the resources that we have to make a difference in someone’s life. It thinks that is very hard to come by,” said Lee.