Brandeis zebras are a safety hazard

Driving on campus is a nightmare: there are students everywhere (who jump out from behind cars), random roads and visitors who do not know how the roads on campus work. And when there is bad visibility? Forget it.

But there is one place in particular that is the worst on campus: the part of Loop Road that goes in between Skyline and East Quad. There are two zebra crossings (crosswalks) on that road, which are insanely dangerous for both drivers and pedestrians. Why are they dangerous? Because people are allowed to park right next to them, which drastically decreases visibility. The marking of the parking spots are less than 10 centimeters away from the actual zebra lines.

I really could not believe that this was legal. How can you allow cars to park right next to the zebra?! Well I decided to check whether it was. I was very surprised to find out that according to the Massachusetts Driver’s Manual, you cannot park “in a crosswalk, in front of a driveway, or in front of a handicap-access ramp” or “within 20 feet of an intersection” (this can be found on page 108 of the 2021 edition). What the f*ck. So I guess Brandeis gets away with this because these zebras are not at an intersection, and as long as drivers don’t park on the actual thing it’s legally okay. Well let me tell you that this law is unsafe and just stupid. To the state of Massachusetts: I am disappointed in you. If someone is parked not on a zebra, but just 10 centimeters away, a driver cannot see pedestrians that are about to cross. Yet again I find myself saying that laws in Ukraine are better than they are here: you cannot park within 10 meters (30 feet, for people who do not know normal people units) of a zebra, on both sides. You know what that allows for? Visibility for the drivers.

I am not here to fight the laws in Massachusetts, but Brandeis, you should definitely do better. I understand that there is already a parking shortage, especially on upper campus, but come on. Those two parking spots won’t change anything majorly, but they will make driving on Loop Road (and crossing it) a lot safer for both the drivers and the pedestrians. Shouldn’t Brandeis care about the people on this campus? Even if I am driving 10 miles per hour there, if someone comes out from behind the car, chances are, I might just not have enough time to react and stop. Though I have good news for you pedestrians too: you have a 90 percent chance of survival when struck by a car travelling at 19 miles per hour (or below), so pray that the drivers are going at less than that while you cross Loop Road from the hell-hole that is East.

And I am super cautious when I am driving there, so I should really not be that stressed when driving there. However there are plenty of people that go way too fast there; I have even gotten honked at for slowing down near the zebras. Even if you are going at the speed limit there, if someone comes out from behind a parked car, you still might not have enough time to stop.

You think I am being dramatic? Let’s take a look at the photos near the bottom zebra on that road. Exhibit A shows the view from the driver’s side of the car when the car is two to three parking spots away; if there was a person standing on the sidewalk waiting to cross, I would not see them at such a distance. Even in Exhibit B, where I am one parking spot away from the zebra, there is still a chance that I would not see the person. If the person was shorter and standing on the left side, then I would not see them even being about three meters away. And these photos were taken in the middle of the day, on a clear day. With questionable visibility even during the day, imagine this area at night? Or if there is bad weather? You will not be able to see someone crossing.

Now take a look at Exhibit C, where there is no car parked on the parking spot closest to the zebra. Even being more than three parking spots away, you can clearly see the pedestrian on the sidewalk; makes you feel a lot better about driving there, huh? And that photo was taken in worse weather conditions than the first few. This is the change that one parking spot can make. Wouldn’t that be so much better for literally everyone?

The same thing goes for the zebra that is a little higher up the road. Right now there is literally no good place to exit East! I am really surprised that no one has gotten hurt there yet. Do better, Brandeis. 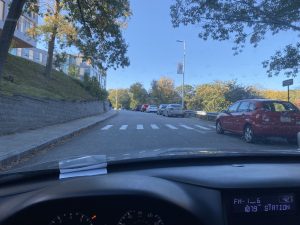 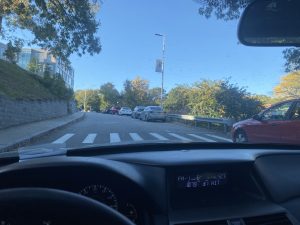 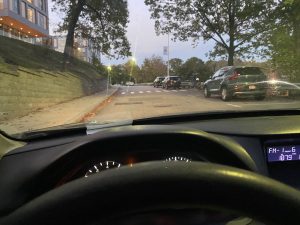