‘Sweet Home’: Simple, satisfactory and coming back for a second season

Recently, “Sweet Home” started production for its second season, so I thought that now was an excellent time to finally start this horror-apocalyptic Netflix Korean drama. Based on the webtoon of the same name, “Sweet Home” follows a group of people living in an apartment complex trying to survive as humans mysteriously start turning into […]

Maggie Shealy ’23 and Tony Escueta ’25 traveled to the University of Notre Dame to represent Brandeis at the NCAA National Collegiate Fencing Championships. Shealy ended the tournament with 14 wins and nine losses placing eight in the tournament, while Escueta ended with six wins and 17 losses placing 22nd overall. Brandeis as a whole […]

The Brandeis Baseball team defeated two New England Small College Athletic Conference (NESCAC) opponents this past week, defeating Bates 4-3 on Friday in walk-off fashion and sweeping a double-header against Amherst 8-0 and 7-4. The Judges have won eight in a row and are 9-2 this season.   Friday, March 25: Brandeis 4 – Bates […]

The 94th Oscars brought the stars and the slaps

After months of speculation, it all came down to this one night. On March 27, the 94th annual Academy Awards ceremony was held at the Dolby Theater. The ceremony celebrated the best in film for 2021 and this certainly was an entertaining show. Hosted by Amy Schumer, Wanda Sykes and Regina Hall, this show made […]

Sam Dienstag ’24, a leading swimmer for the Brandeis Judges and a business and economics major, has recently competed in Nationals against the best college swimmers in the nation. Dienstag’s swimming career began when he was seven years old, when he “tried basically every sport at a young age, and then [he] realized that he […]

Brandeis celebrated the 2022 Asper Award for Global Entrepreneurship recipient Stephanie Tilenius ’89, MA ’90 and the founder and CEO of Vida Health, Inc. in a recent webinar. Brandeis President Ron Liebowitz and Dean Kathryn Gaddy shared congratulatory remarks, and the award was presented to Tilenius by Leonard Asper ’86 who is the founder of […]

Peter C. Frumhoff—an ecologist named as the 2022 Richman Distinguished Fellow in Public Life—spoke to community members on Wednesday in the Rapaporte Treasure Hall about his work and how he is translating it to action on climate change. Frumhoff is a global change ecologist who has experience in climate change impacts, climate science and policy, […]

Students invited to fill out the Campus Climate Survey

The university announced that it has released its survey to assess sexual and relationship violence on campus. The survey is created for the university to receive feedback on those issues on campus, according to an email sent to community members on March 22 from the Office of Institutional Research.  Both undergraduate and graduate students were […]

U.S. News and World Report issued its 2023 rankings for the graduate school programs in the U.S. The Heller School of Social Policy and Management at Brandeis was listed as a top 10 public affairs school in two categories: social policy and health management. Currently, Heller is ranked as eighth best for social policy graduate […]

Basketball has been a major part of Nolan Hagerty’s ’22 life for almost two decades now; “my dad is a coach, he coaches basketball and football back home, so he encouraged all the kids in my family to play a sport,” Hagerty told The Brandeis Hoot in an interview. Hagerty chose basketball. “I started playing […] 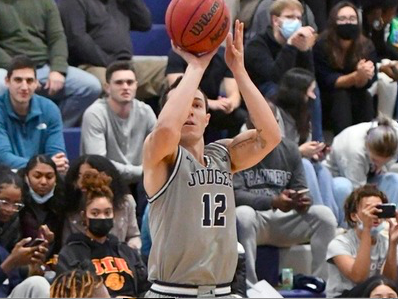 Some choices are difficult to make, while others appear to be so obvious. Brandeis men’s basketball player Collin Sawyer (GRAD) made one decision that was almost obvious at the time, but ended up shaping the next six years of his life.    Before attending Brandeis, Sawyer had to make a decision about where he wanted […]

Since the university announced its easing of COVID-19 policy on March 3, there has been a significant surge of cases. This is shown in the most recent cases report according to the Brandeis COVID-19 dashboard: from the past week of March 20, there have been 133 positive cases out of 4,026 individuals who got tested.  […]

The Brandeis Haircutting Club was chartered during last Sunday’s senate meeting. Jason Dayan ’23  and Jacob Zackai ’23 attended the meeting to re-present their plans for the club.  After being put into the waiting room, Sofia Lee ’24 commented, “I think they really took our feedback and have gained a lot of interest” and recommended […]

The slap heard around the world: the politics

You’ve seen it, I’ve seen it, we’ve all seen it. Unless you live with Patrick Star, we all know about the highlight of this past Sunday’s Oscars: Will Smith slapping Chris Rock in front of millions during the globally televised event. When I first heard about the slap, I was a little surprised, but I […]

The university saw an increase in positivity rates on campus last week, with 135 students testing positive on the week of March 20, according to the Brandeis COVID-19 dashboard. Even though the numbers have decreased in comparison to last week, the numbers are still strikingly higher than what the university is used to seeing, with […]

Univ. disassociates from MESA after resolution to support BDS

The university announced on March 24 that it would be disassociating from the Middle East Studies Association (MESA) after the organization announced it would be supporting Palestinian boycotts, divestment and sanctions (BDS) against Israel. The university stated that “as a matter of principle” the university does not support academic boycotts in any country, according to […]

After starting the season with a nearly month-long break, the Brandeis softball team is off and running with quite a few games at the end of March. Between March 25 and 30, the Judges played six games.  Four of those games were against Washington University and two were against Lesley University.  Game one against WashU, […]

Another club that was reborn from the ashes after the coronavirus pandemic was the Brandeis Equestrian Club. According to co-captains Alex Martin ’22 and Izzy Eisendrath ’22 the club is more of a club sport than anything else.    “It is like a sports team,” Eisendrath told The Hoot in a Zoom interview. “We have […]

BookTok worth it or not: ‘Lovely War’

After a brief hiatus, I’m back with more ammunition. Fresh out of quarantine I’ve literally spent all my time reading and watching “Bridgerton” season two, so you know what that means? A lot of content for our arts section that’s right. Here’s my deal, I find books from BookTok, and if I can get a […]